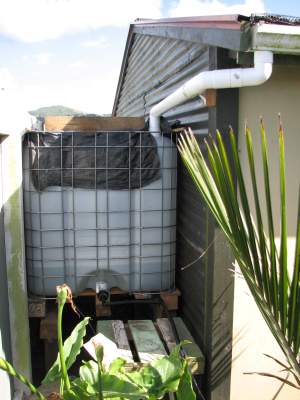 A project to install cheap (used) 1000 litre tanks to collect rain water for the garden.

Pacific Wallcoverings in Porurua sell used 1000 litre tanks that held cellulose based (non-toxic) wall paper paste for $85 each. The tanks measure 1m wide x 1m tall x 1.1m long. The space between our garage and the back fence 1.05m wide - just enough to fit 4 tanks, for a total of 4000 litres.

I'll use this for watering the garden in summer. In winter they'll help reduce peak flows off the garage roof. And eventually I'd like to connect the tanks up to the toilet and washing machine.

The tanks I bought were made in June 2007 by Sotralentz Packaging in UK or Spain. According to their IBX SLX 1400 data sheet they are made of high density polyethylene (HDPE) and have a life span of at least 5 years. They should not be left in direct sunlight (UV) for long periods.

The tanks contained Aquavate 520 (cellulose based acrylic wallpaper prepaste) made by ETA Solutions Ltd, UK. There was less than 5mm of paste left in the bottom of the tanks that I had to flush out. [Update April 2008: Pacific Wallcoverings also have used tanks that contained other stuff - which may not be so benign.]

I emailed ETA Solutions Ltd about cleaning the tank for rainwater use on the garden. Here's what they said:

The Aquavate 520 upon contact with water will form a viscous gel. This gel is completely free from hazardous substances - whereas it might not look too pretty it is still a similar product to those used in garden centres to keep plants wet (gels don't really dry out) and are often mixed in with fertilisers and used in grow bags.
Half a litre of paste should be fine (ten litres or so might block up your drain). I'd attack it with a hose to loosen it, pour in 20 litres of water, then "mix it up" with the hose again, and then discard down the drain.

I prefer not to just toss it down the drain - I've got a bucket of the goop and am looking for a better use for it. Perhaps I should use it in the garden when I plant new trees or shrubs? If you have a good/better idea please email me.

Four tanks in and working:

Note: Actually it was cheaper than that because I already had some of the drain pipe and fittings, and some 100x100 H4 fence posts - so all up it probably cost me more like $500. 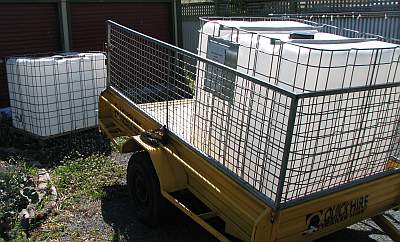 I bought two 1000 litre tanks from Pacific Wallcoverings in Porurua for $85 each. They are 1m x 1m x 1.2 m plastic containers in a steel frame, on a wood pellet base. These had contained cellulose wall paper paste. According to the manufacturer once you wash out the dregs (which is quite "gluggy") they'll be fine for holding rain water to use on the garden. [Note: a friend suggested the paste may include a fungicide - so you may want to avoid watering mushrooms.]

The 2 tanks fit on the one trailer perfectly.

Note: the 1000 litre tanks are not pretty. So if you plan to use them - try to locate them somewhere hidden from view. In my case - behind the garage.

Cleaned out the tanks using a mains pressure garden hose. It took about an hour to do both tanks. I used the hose to loosen the remaining goop, then drained each tank into an old sheet. This collected the goop and let water drain through, onto our gravel driveway. So now I have a bucket full of the goop.

Concreted the posts in place so that they are 550mm above ground level. Once I've added the 100mmx100mm bearer on top it'll be 650mm high. This will put the top of the tanks at about 1800mm - which is just below the top of the fence.

Shifted tanks onto bearers with help from Patrick and Stu. The end result is just far enough below the fence top that they are nicely hidden from view - both from the stop-bank behind the fence and from the house. 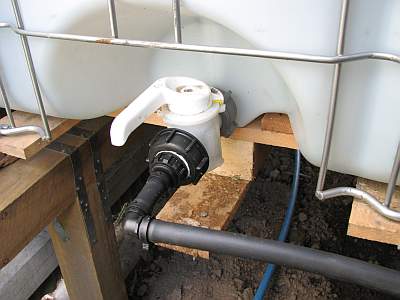 The tanks come with a black screw cap over the end of the valve. I drilled the middle of the cap out and fitted a NETA 19mm "tub outlet" fitting, sealed with silicon sealer. From there it's all standard NETA 19mm irrigration pipes. I chose 19mm rather than 11mm to allow for a bit more flow.

Added a pipe to a garden tap next to the garage door.

Covered both tanks with black polythene to protect them from UV. 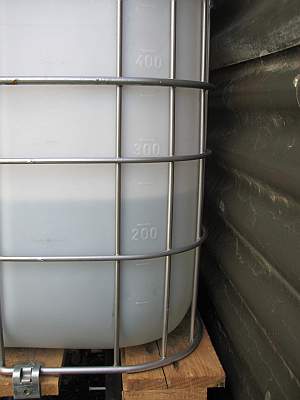 A southerly storm blew through in the afternoon and delivered a heavy downpour which resulted in 230 litres of rainwater collected.

I disconnected the pipes from the tank to flush out a few litres - just to make sure it was clear. Then I connected it back up and opened the valves between the two tanks. So I'm now collecting into both tanks.

I also unscrewed the lid on the second tank a bit to allow air to seep in and out, as the water level rises and falls. From now on I'll multiply the level indicated by two to get the actual amount collected.

Got back from holiday to find 860 litres in the tanks.

Bought another two 1000 litre tanks to install behind the garage.

I found this on YouTube: Rainwater Harvesting Workshop by Ron Sperber, Dec 2007

"On average in New Zealand we use 50m3 per person per year."

What size tank do I need?

(This was shown on one of the slides. My garage roof is only 41m2.) Average percentage of yearly requirement fulfilled (for a 150m2 roof)

This suggests a budget of 100 litres per day for the garden. Of course, we don't bother watering the garden in winter - only in summer. That suggests that if I started summer with a full 4000 litres I'd have 40 days worth of garden watering. The low rainfall months in Lower Hutt are late January through to the end of April - roughly 100 days.

The driest month is February with 85mm of rain - which equates to 3,530 litres of water on the roof.

One of the speakers in the workshop mentions that you should expect to loose 5 to 10% from that ideal. So - in our driest month I can expect/hope to collect about 3,000 litres.

Cleaned out the third tank. I drained the water and goop into an old sheet in order to capture the goop - which I then slopped into the bucket with the first two tanks residue.

Then shifted it into place behind the garage and connected up to the existing tanks.

Cleaned out and positioned the fourth tank.

Connected up the drain pipe. I'll wait for a bit more rain to flush this tank out some more befroe I connect it up to the existing three tanks.

The rain over the last week mean I'm back up to 1000 litres of water in the tanks.

Added a (19mm polythene pipe) drainage line at the 75% mark with a valve. This allows me to drain the top 25% of the tanks (top 1000 litres) directly to the garden in the event of heavy rainfall when the tanks are already quite full.

So in winter I'll leave this open to drain whenever needed. But in spring and summer I'll keep it closed so that I can hang on to the maximum amount of water.

Received this email from Mary:

Paul, I quickly read your message about water tanks and collecting a full tank before the summer. Would this get stagnant if a tank filled up a while before summer use started? Might some need draining off?

Note: I am not an expert on this so please feel free to correct me if my assumptions are wrong...

We're currently using this to water the garden. As such we use roughly 100 litres every 2-3 days. I'm hoping that will be enough to avoid stagnant problems.

When I was installing the drain pipe on the 9 March I noticed some "dirt" in the bottom of the tank. We've got heavy machinery working on the river bank behind our house which results in a lot of dust blowing around - so I'm guessing it's wind blown soil. Given that I'm using this water on the garden - that doesn't seem like a significant problem.

I'm planning to flush the tanks completely later in the year when it's raining a lot more.

Hi Paul, Just in case you get anybody in the Auckland region asking about the source of plastic water tanks. I got a couple from "Flint Industries" in Penrose, Auckland. These had contained acrylic base for paints, they rinse quite well but the usual acrylic smell lives on, but will leave them open to air prior to installation. As the water is only for they garden, I'm sure plants won't mind!!! Thanks again Brian.

I don't want to have large tanks near the house because there's not that much room need the bathroom corner of the house.

Our toilet uses: (somewhere between 3-7 litres - I need to measure this)

Our washing machine uses: ( - I need to measure this)

I've recently read a detailed book on rainwater harvesting [whose name I can't quite remember]. The best idea I took from the rainwater book was to use a pantyhose as a filter on the inlet. Cheap and easy to replace - just let it hang down into the tank and replace it every 6 months. This should collect most of the "large" debris that might get washed into the tank. A first-flush diverter is better, but costs a lot more.

I also recommend Create an Oasis with Grey Water.

If you have any questions or suggestions please email me: paul at kennett dot co dot nz